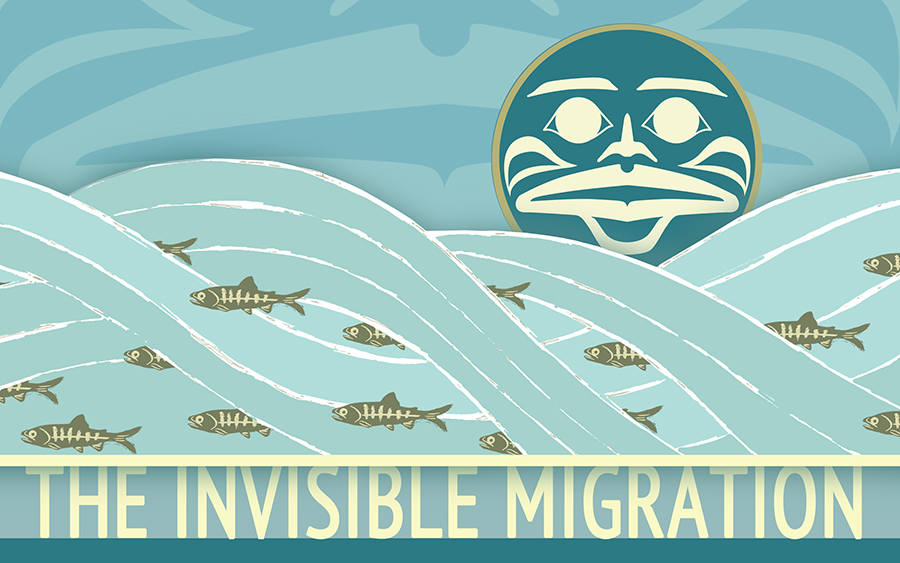 A few weeks ago, I was in Hazelton for an unexpected visit and ran into Shannon randomly in the community. We had been corresponding via email, and upon running into each other she asked me come into the Skeena Watershed Conservation Coalition office for a casual face-to-face meeting with her and Brian. We discussed some of the potential work that I would maybe be doing over the summer, and part of the work began the very next day attending the first of three Invisible Migration Events - held at the Lake Babine Nation (LBN) Fisheries site at the historic Babine River fish fence. I quickly agreed to go, and at the time had no idea that my life was about to change in a profound way -- the beginning of the rest of my life, as it were.

Brian and I showed up on site after two hours on two bumpy forest service roads through the mountains outside of Smithers not really knowing what to expect. We were met by a mini city of tents equipped with tables and chairs and received a warm welcome from all of the LBN workers. With the set-up already complete, and not much else to do, I had time to spend the evening discussing the world of fisheries in the Babine region, everyone’s educational backgrounds, and had extensive conversations surrounding tradition and culture with Angel. Later in the evening, Shannon showed up with a ton of Indian food that she brought up from Smithers, and we heated it up over the fire and chatted (and roared with laughter) into the evening. I remember having this moment where I just sort of smiled to myself and was like yeah this is my life...

The following day was the event, and we were rested, prepared and raring to get started. Busses, vans and truck after truck kept rolling in and eventually the event was in motion, and there were adorable little children running around as far as the eye could see. I could not believe how quickly everything came together and how organized everything was: there were ‘bagged’ lunches provided upon arrival, and it made my life to see all the happy kids running around with their juice boxes and healthy snacks. We were offering boat tours up river to see the juvenile salmon processing station, and I was the gatekeeper allowing groups of around 6 across at a time. I met so many amazing people and could not stop freaking out about all of the cute kids who were eager to tell me their names, grade, who their brother/sister was, and just how excited they were to go on the boat and to see the ‘baby’ salmon. There was a ceremony that happened where everyone had a chance to release sockeye smolts into the river to continue on their journey to sea. Shortly after, the smell of BBQ salmon and fresh bannock filled the air and part two of the feast began. There really are no words to describe how amazing the fish tasted. It blew my mind to think of the little smolts we had released venturing such an unfathomable distance, and turning into the adult version of the salmon we know and love to eat. The event went without hitch, and I could not believe that I was so lucky to be a part of it. But it was about so much more than the event: I was becoming part of a world I had only dreamed about living 1400+ km away for the last two years.

I had intended on being back in Hazelton for part two of the Invisible Migration event that took place at ‘Ksan, but was not able to make it back in time as travel plans changed and my arrival back was slightly delayed. I was super bummed out about it, but my aunt Evangeline assured me that she would go in my honour, and she and Shannon took some absolutely amazing photos that made me feel like I was there -- I definitely was in spirit. I eventually arrived back in Hazelton, and within a few days left yet again to attend the Invisible Migration event alongside Shannon at the North Pacific Cannery in Port Edward -- the place where my great-grandmother worked for over 50 years. I saw some familiar faces from LBN, and got to meet some super impressive people - scientists and elders alike. Shannon rocked the mic as the MC, and because it was my birthday, of course made a huge announcement that it was my birthday, and also that I was officially being brought on as SWCC’s summer intern. Definitely a shining moment in my life. The event was absolutely amazing. The Kaien Island Elders Society catered the event so the food was phenomenal and there was salmon prepared over ten ways, oolichans, fried bread, and just about everything else you could imagine. We were doing boat tours, and yet again I was lucky enough to catch the last trip. As I was out on the ocean, wind whipping through my hair, I had an overwhelming sense of belonging and in my heart knew: this is exactly where I am supposed to be.