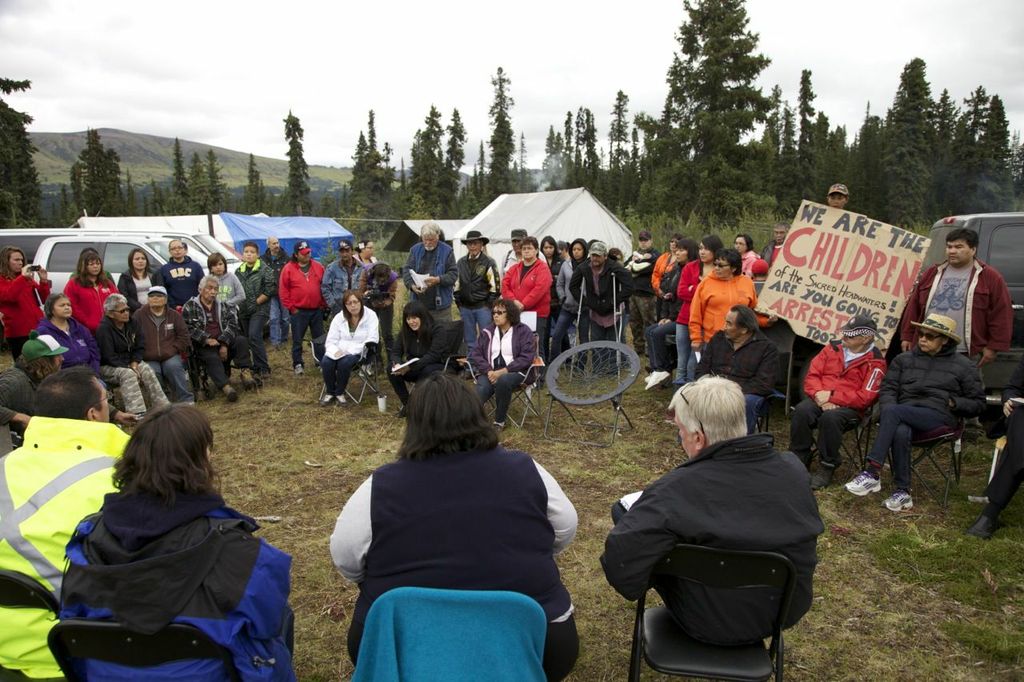 Our flight into the Klappan began over the Skeena River where it winds through the community of Terrace.  As we turned north and left the Skeena Watershed to enter the Nass Valley we could see the marks of development in northwestern BC.  The neighborhoods of Terrace gave way to logging roads and clear cuts and then re-grown forests and abandoned roads.  The fresh scar of the Northern Transmission Line stretched on as far as the eye could see.   In between the grid laid out by logging roads and the transmission line, creeks tumbled over rocky cliffs and into glassy pools.  Tall swaths of cedars flanked emerald lakes dotted with lily pads. Icy tongues of glaciers were just visible in the distant peaks of mountains shrouded in mist.

Flying through the Nass Valley, logging gave way to mining camps.  Steep canyons rose up from creek beds where massive piles of logs lay in jumbles perched high on the cliff, testament to last year’s spring flood.  As we flew towards the headwaters of the Nass River the valley widened and iridescent green marshes bordered the ever-narrowing river.  After passing through the Skeena, Nass and Stikine watersheds we entered their birthplace; the Sacred Headwaters.  The clouds lifted as we entered the Headwaters and we were treated to vistas of gleaming alpine slopes.  We set down in Beauty Camp and were immediately greeted by Tahltan children eager to check out the helicopters.

While the children flocked to the helicopter pilots the adults met in Jerry Quock’s camp to hear from Annita McPhee, President of the Tahltan Central Council and Marie Quock, Chief of the Iskut Band Council.  Shortly thereafter Fortune Minerals arrived with an RCMP escort.  Chairs were set up and the meeting was called to order with a sense of urgency as the helicopters needed to take off in less than an hour to make it back to Terrace before night fall.  With Mount Klappan immediately in the background Fortune Minerals’ representatives introduced themselves to four generations of Tahltan people, united in their opposition to Fortune’s plans to develop a coal mine in the heart of the Sacred Headwaters.

The meeting got off to an awkward start as Robin Goad, CEO of Fortune Minerals recognized the Tahtltan’s responsibility to the stewardship of their land and then attested that his company also had a “historic responsibility” to the area.  The members of the crowd looked around at each other, incredulous that this man could compare Fortune Mineral’s thirteen years in the Klappan to the millennia that the Tahltan have spent living in and protecting the Sacred Headwaters.  This disregard for the Tahltan people, their Aboriginal Rights and Title and their ancient cultural and spiritual connection to the area continued throughout the meeting.

Incredibly, at one point Goad disputed with the Tahltan as to which mountain is actually Mount Klappan.  He claimed that his coal mine was not on Mount Klappan but was on the mountain behind him. The crowd cried in unison “that IS Mount Klappan.”  Goad momentarily tried to deny this, but soon fell silent.

Although he initially recognized that he was on Tahltan territory Goad continually asserted his company’s legal right to be in the area.  He also referenced the millions of dollars his company and their investors have spent to develop their project.  He asked the Tahltan to respect his investors.  With the shouts and laughter of children playing in the background McPhee responded that the Tahltan also have investors, their children are their investors!

The fierce determination resonating from the Tahltan elders and the confident energy radiating from Annita McPhee and Marie Quock contrasted sharply with the detached, flat expressions of the Fortune Minerals Representatives.  Goad repeatedly attempted to pass off any responsibility to resolve the issue.  Rather than look for solutions between his company and the Tahltan people Goad said over and over that the Tahltan need to respect the environmental assessment process and that they should convey their concerns to the Government of BC.

Amidst all his blundering, Goad did make one good point.  The BC government is sending mixed signals as to their intentions.  They have stated they support the idea of protecting the Sacred Headwaters.  Which begs the questions; why is the provincial government granting exploration permits for coal mines that are never going to happen?

Annita McPhee spoke of the Resolution that was recently unanimously passed by the Tahltan to protect the Klappan.  Making reference to the many developments the Tahltan have decided to allow on their territory she continued on to say that there are some places the Tahltan have to protect and they were drawing the line.  The Klappan will be protected forever!

The helicopter pilot began rounding up his passengers, urging them towards the helicopters.   As we reluctantly left the camp we flew beside Mount Klappan and then headed towards the Skeena River.  As we entered the Skeena Valley we could not fathom Fortune’s plans to build a railway along the banks of the Skeena, which below us seemed no more than a tiny creek.  At the mouth of Kluatanton River, the first major tributary to the Skeena, we saw Atrum Coal’s exploration camp.  This company is proposing a potential strip mine for coal on both sides of the Skeena River.  After receiving no indication from Fortune Minerals that they would back down and now flying over a second coal mine camp the urgent need for protection of the Sacred Headwaters was all too obvious.  The beauty of the flight inspired everyone in the helicopter and our commitment to supporting the Tahltan people was strengthened.

This is the Sacred Headwaters for all Nations.  Our strength is in our unity.

Stand Tall with the Tahltan