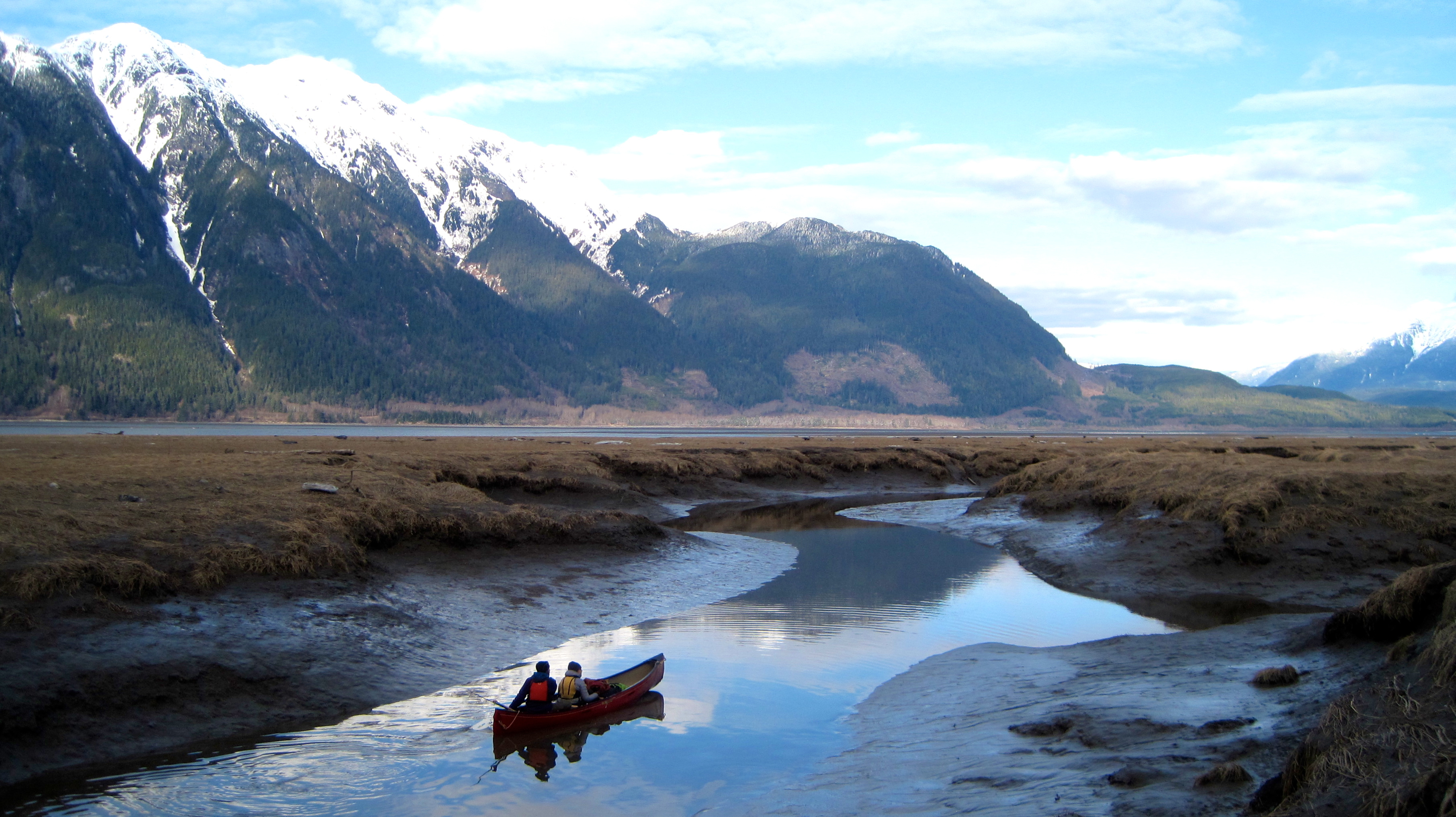 The spring equinox arrived bright and clear.  Snow was on the ground but spring was in the air so a group of local yokels strapped a canoe on the roof and hit the road.  Sun gleamed off of ice chunks on the Skeena provoking a few worries about what we would encounter on the river.  Would the Nass be as icy as the Skeena?  As we turned north on the Nisga’a highway we gave ourselves over to the unknown.  Eventually the highway left the pine forests to wind its way through ancient lava beds that covered the Nass Valley over 250 years ago.  In the Nisga’a oral tradition the lava, long since cooled, is a reminder of the respect we should give to the natural world and the wisdom of the elders.

Upon arriving at the Nass River we were thrilled to see the river flowing free of ice from bank to bank.  We piled into the canoes and pushed off.  Breathing deeply I reveled in the contrast between the chill of the air in my lungs and the warmth of the sun on my face.  Our paddle strokes led us down river towards the promise of the spawning eulachon. Floating through Gitwinksihlkw dogs greeted us from shore as we marveled at the community’s mountainous backdrop.  We stopped ashore to stretch our limbs and walked amongst devils club and towering trees. As the afternoon began to fade we camped on a gravel beach encircled by gleaming peaks.  Sheltered behind a log pile we passed the evening beside the glow of the campfire.

The next morning we pushed off, delighted to see a dazzling blue sky reflected in the river.  Merganser ducks dotted the icy shoreline as eagles circled overhead.  The number of birds increased steadily throughout the morning.  As we rounded a bend in the river an audible gasp was heard from both canoes as we took in the scene ahead.  Thousands of gulls dipped and dived above the river filling their bellies with glistening eulachon.  The river was veritably pulsing with life as the return of the eulachon ushered spring into the Nass valley. 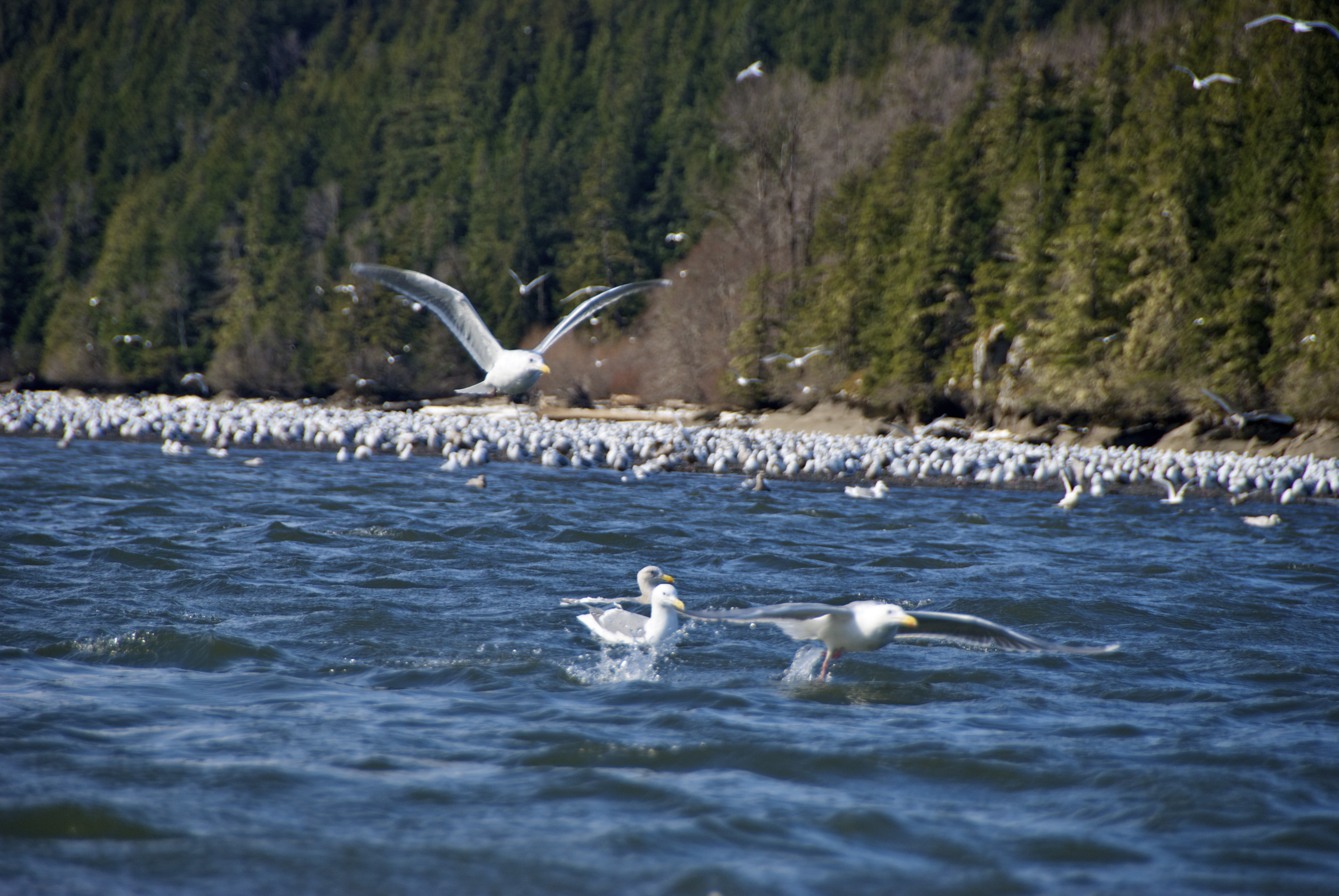 For the next two days we witnessed a tremendous display of wildlife.  Seals accompanied us downriver, their curious heads popping up from beneath the icy water.  Countless sea lions emerged beside our boats impressing us with their power in the water.  They exhaled their breath in dramatic bursts that seemed to propel them forward.  The sea lions swam in tight groups disappearing and reappearing from beneath the surface so quickly there seemed to be multiple heads attached to one body.

Camping that night on a sandy beach we were treated to the view of two black bears making their way along the shoreline.  They moved slowly as if the life was just beginning to return to their limbs after their winter sleep.  Being back on the river had a similar effect on me.  The energy of my surroundings entered my veins and infused me with the revitalizing vigor of spring.  The birds quieted down as dusk settled over the river.  The morning broke with a cacophony of songbirds and the melancholic screech of the gulls.  For an instant I thought perhaps I had awoken in a jungle rather than on a riverbank in northwestern BC. 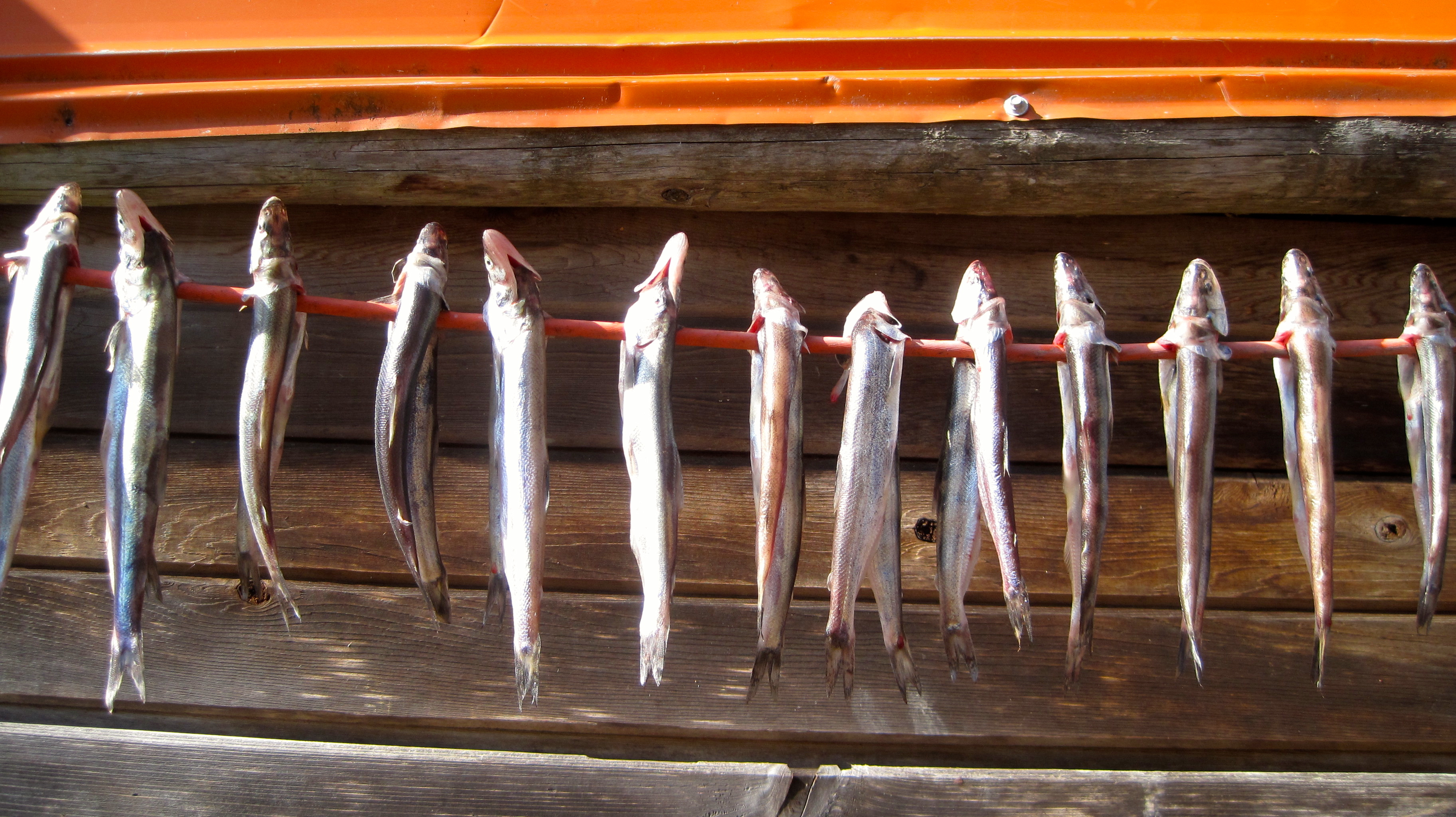 We stopped in at a fishing camp that morning where an impressive mound of eulachon was fermenting, the first step in processing this important food source.  After some swapping of stories we pushed off again with recommendations from the locals about the tides and where to spend the night.  After a few hours of leisurely paddling and ample drift breaks we camped at the edge of the forest, pulling our boats far up from the river’s edge to escape the rising tide.

A biting wind blew in over night, rousing us from our slumber early in the morning.  As we drank hot tea and ate a hearty breakfast we contemplated the crossing ahead of us.  The Nass had widened considerably since we had started the trip and we could just make out the road to Gingolx across the river.  We set off, straining against the wind and the tide leaving behind the safety of the shore.  A few icy waves splashed over the bow of the canoe as we reached the mid-way point.  We continued on, working hard to balance our angle between the breaking waves and the howling wind.  We pulled up on the opposite shore just as the first snowflakes began to whirl around us.

Simultaneously tired and exhilarated we packed up our gear and headed for the hot springs.  A gentle snow fell while we soaked in the hot mineral water.  The group was quiet as we allowed our limbs to relax and listened to the wind rustling the tree boughs.  Late that night I made it home and crawled into bed.  As I closed my eyes and waited for sleep images from the river appeared behind my eyes.     The swirling mass of white gulls is forever seared into my memory, a reminder of the abundance provided to us by our rivers and the strong need to protect them.