Skeena Estuary: Heart of the River (trailer) from SkeenaWild on Vimeo.

The Liquefied Natural Gas (LNG) industry could be coming to the Skeena Watershed for the first time.  There are upwards of six northern corridor pipelines proposed to cross northwestern British Columbia connecting the gas fields of the northeast to the coast.  While these projects are in the early stages of getting approval and financial backing, there is tremendous pressure from the provincial government to bring the LNG industry to British Columbia.  Currently, there are 3 terminals and their associated infrastructure (pipelines) approved.

The Skeena estuary contains an abundance of life. It is among the most productive ecosystems in the world and home to a variety of unique plant and animal communities including wild salmon and steelhead. Today the Skeena estuary faces an uncertain future with the many industrial development projects taking place in the area. Designated as critical salmon habitat, this natural wonder requires special management, consideration and protection. We're working to understand the impacts and make sure our estuary and watershed are able to support robust salmon and steelhead populations for the years to come. 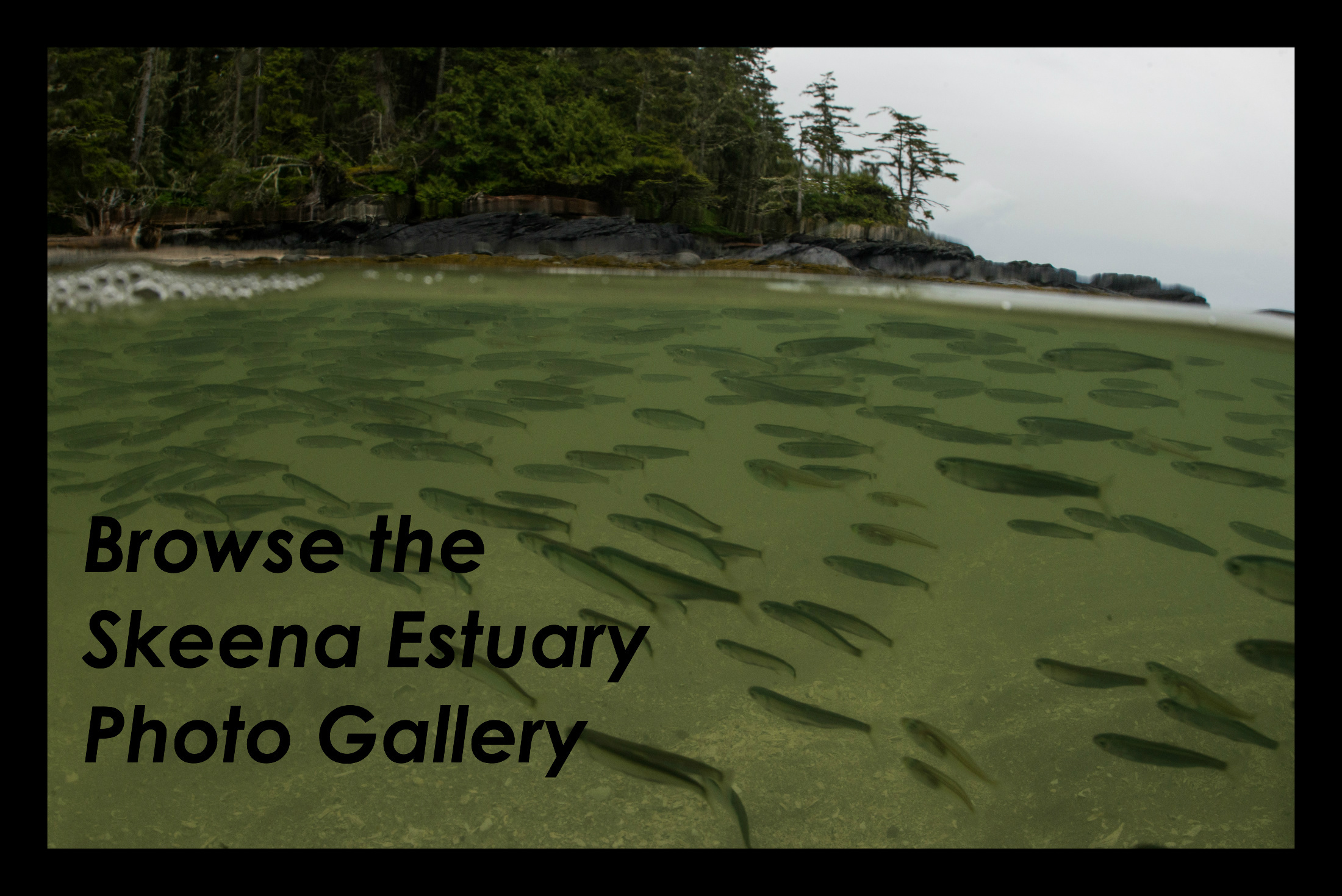 The Liquefied Natural Gas (LNG) industry could be coming to the Skeena Watershed for the first time.  There are upwards of 6 northern + 6 southern corridor pipelines proposed to cross northwestern British Columbia connecting the gas fields of the northeast to the coast.  While some of these projects have been approved and others are in the early stages of getting approval and financial backing, none are currently moving forward but there is tremendous pressure from the provincial government to bring the LNG industry to British Columbia.

The LNG industry is radically different from the current natural gas industry in BC. This gas is not for the people of the northwest to use for heating their homes and cooking their dinners. Rather, this gas will be shipped to Asia where high prices for gas are encouraging many countries including Australia to rapidly develop LNG industries.

Where Does this Gas Come From?
The gas fuelling this industry is “non-conventional” gas extracted in the northeast corner of the province.  Gas trapped in rock deep underground can be extracted using a process called hydraulic fracturing, also known as fracking. Millions of gallons of water and thousands of gallons of toxic chemicals mixed with sand are pumped underground at very high pressure, which crack the rocks allowing the gas to escape. Since 2002, over 10,000 wells have been drilled and fracked in BC;  it is estimated that 10 times more fracking will take place if LNG terminals are built on the coast.  Each well pad can use up to 100 million liters of water to complete its fracking, much of which is not returned to the water cycle. Fort Nelson First Nations have expressed grave concerns over the potential for trillions of liters of water to be drawn from the Fort Nelson River by companies engaged in fracking.
Check out the youtube video!

How Serious is Fracking?
Countries such as France, Germany and Northern Ireland have banned fracking due to concerns over its environmental and social impacts.  The province of Quebec has placed a moratorium on fracking until further research can be done. These moratoriums prompt the question as to why BC is expanding fracking without greater consideration for its environmental and social consequences.

Many of the chemicals being used in fracking are well documented for causing cancer, birth defects, and disorders of the nervous system. In addition to groundwater contamination fracking can also cause earthquakes. Methane accounts for 14% of global greenhouse gases (GHG), and is responsible for over one-third of human-caused climate forcing. Between 3.6 and 7.9% of the methane escapes into the atmosphere during shale-gas production due to venting and well leaks; this level is at least 30% higher than that released during conventional natural gas production. On a 20-year time horizon, the GHG footprint for shale gas is up to 43% higher than conventional natural gas, 50% greater than oil and 20% higher than coal for the same amount of energy produced by each of those other sources.

Fracking in the Skeena Watershed?
There is no fracking in northwestern BC, at least not yet. TransCanada, one of the companies vying to build a natural gas pipeline to the West coast has openly stated that if a pipeline through northwestern BC is developed they would explore "midstream resources."  Once a pipeline is in place it would become viable for the natural gas reserves in the northwest to be exploited.  What would that mean for local residents?  Based on the experiences of those who live in fracking areas of northeastern BC we could expect drinking water wells to be contaminate due to methane migrating into acquifers. Fish and other aquatic life would suffer from decreased water flow in streams and die from fracking chemicals that are spilled into wetlands and creeks. Cattle and wildlife could be at risk due to contaminated surface water.

For more information about the risks fracking poses to human and environmental health check out this journal:

Where is This Gas Going?
Once this gas has been extracted, it must first be transported to the coast where huge corporations such as Shell and Chevron will liquefy and ship it to Asia where current prices for natural gas are four times higher than North American prices. To access the liquidfication plants in the Skeena and Kitimat estuaries, pipelines as large as four feet in diameter are required to move the natural gas to the coast. Each pipeline requires a 50 meter right of way to be cleared along its length and will require huge swaths of land to be cut. 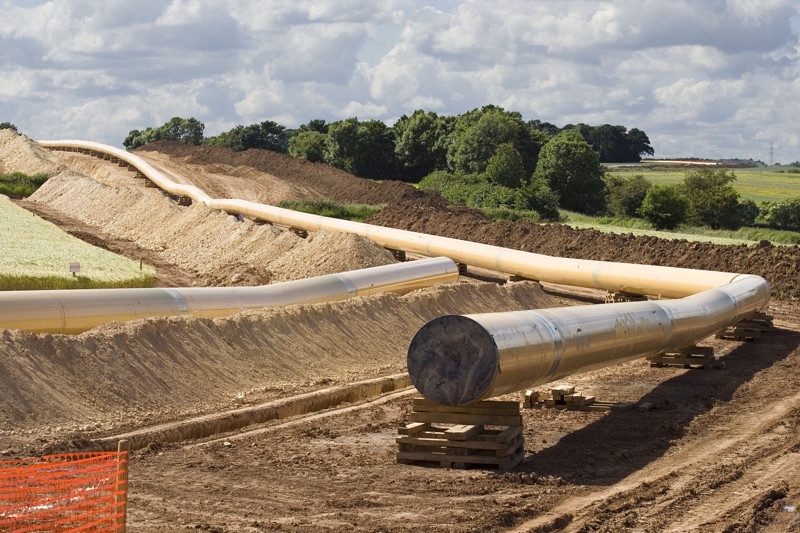 The pipelines are headed for massive liquefaction terminals being proposed for Port Edward and Kitimat. These terminals will cast an industrial shadow over both these communities and dwarf the current development in the Kitimat and Port Edward waterfronts.

In these terminals the gas is cooled to -163 degrees Celsius which liquefies the gas, reducing it’s volume and making it more economical to ship.  Each plant could see a tanker arriving and departing every day, with the 3 known terminal proposals, we can expect a minimum of 660 tankers each year.  LNG tankers are over 300 meters in length, making them equal to three football fields.  These are the largest marine vessels on the planet and we could soon see them navigating through extremely sensitive marine areas.  Wanna go fishing on our coast?  Be prepared for a 4 hour marine clearance protocol to allow the tankers to come and go safely.

What’s at Stake?
Lelu Island and Ridley Island near Prince Rupert are both being considered as locations for LNG terminals.  These islands are adjacent to the most important critical juvenile salmon habitat in the entire Skeena watershed. The Skeena Estuary contains the second largest intact eel grass bed in the province. Eel grass is where all the baby salmon hang out while their bodies adjust to the salt water, the tidal action and stay safe from predators they haven't encountered in the rivers - it's also the time we lose most of our salmon because they don't survive the change in water and/or habitat.  This habitat is critical to the survival of salmon and steelhead smolts as a safe haven.  We don't think the Skeena Estuary is the place for the biggest industrial projects in BC and neither do more than 130 of Canada's most prominent fisheries scientists. 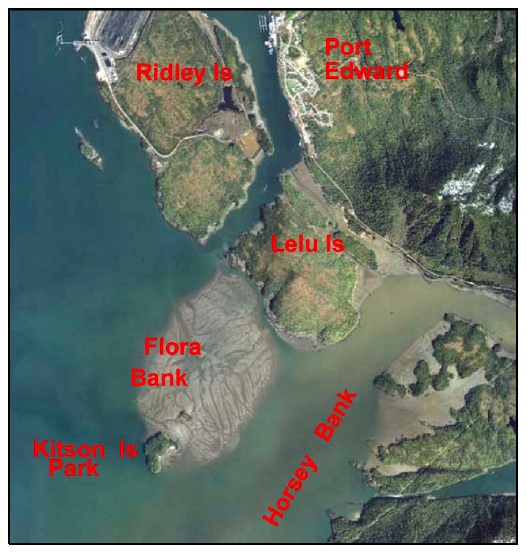 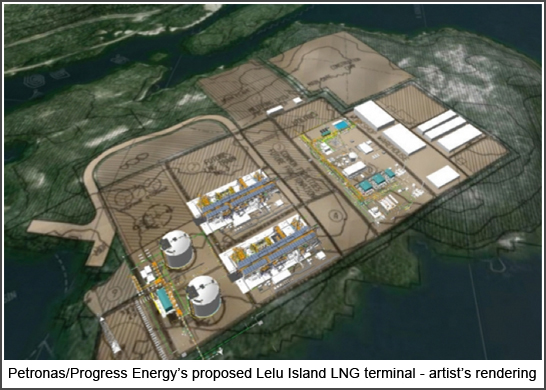 Liquefying natural gas requires tremendous amounts of energy, which BC Hydro is not currently able to supply. Due to this lack of energy the liquefaction process will most likely be powered by burning natural gas.  Pollution from just one of these terminals would eliminate any chances of British Columbia meeting our climate targets. The greenhouse gas emissions of the Petronas PNW terminal alone would consume 88% of the Province's total GHG emissions and there are another 3 terminals approved and several more proposed.  These polluting emissions could have impacts as severe as acid rain and will definitely help cook the planet.  You read that right, it's 2017 and we're worried about acid rain.  5 of these projects will pollute more than the TarSands!!